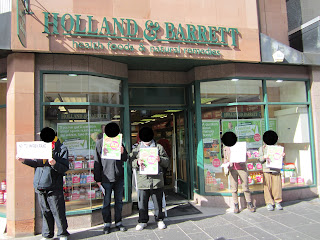 Members of Clydeside Industrial Workers of the World, the Anarchist Federation and Solidarity Federation picketed the Queen Street branch of Holland & Barrett at lunchtime on Saturday 31st March. We managed to turn some people away at the entrance. We had placards proclaiming 'The H&B Workfare Deal, Employ Three, Get One Free' in the style of Holland and Barrett advertising as Holland and Barrett plan to have a quarter of their workers as unpaid labour. Another placard said, 'Say No To Workfare At Holland and Barrett'. We gave out 500 leaflets detailing Holland & Barrett use of unpaid labour. A number of people stopped to ask what the picket was about. A member of the Holland & Barrett staff was one of these people on her way in to start her shift. She said that one girl had been on work experience at the store, but that she had got a permanent job. We pointed out generally Holland and Barrett have not given permanent contracts to 80% of people on work experience, their plans to introduce a 1000 more work experience people in the next year and how that could affect the hours of the permanent staff. The manager tried to tell us to move away from the entrance, but we just ignored her. In a final pathetic attempt to show us who was boss she bluffed that the police were on their way, even though there was nothing remotely illegal about what we were doing.
There were over 20 actions against workfare over the weekend around Britain that will be part of an ongoing campaign. These actions were part of a national day of action called by the Solidarity Federation. The actions tied in with the international days of action against austerity called by the International Workers Association that included the general strike in Spain on March 29th, and the M31 European Day of Action Against Capitalism.
Posted by The Crutch Collective at 13:01